We’ve Got A Mining Problem 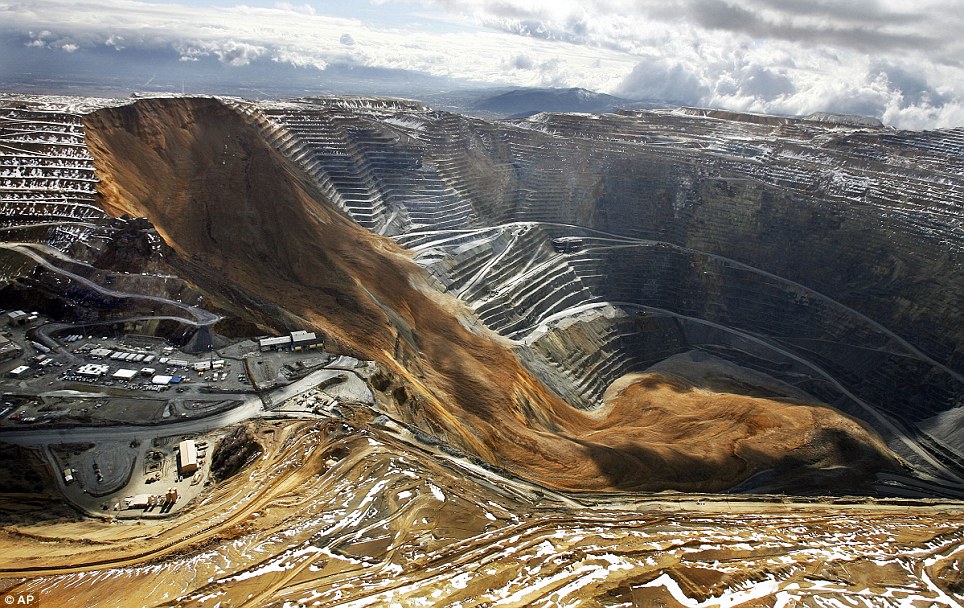 And it’s getting worse.

The negative effects of mining are well known:

Lesser-known effects include the formation of sinkholes, significant use of water resources, dammed rivers and ponded waters, wastewater disposal issues, acid mine drainage, endangerment to staff in terms of physical risk, health implications, and the effects of long term exposure to chemicals and toxins, and then, of course, there are the hazardous materials we don’t see dumped underground including heavy metals, radioactive wastes, acidic water, chemicals, that all create direct harmful effects on the health of the population living around the mining site.

But Do We Need To Mine?

Mined materials sustain the development of our standard of living and are necessary for almost everything. Importantly, they are also needed for our societies to transition into green economies. Romco recycles some of these elements: aluminium and copper. They are indispensable for things like:

The physical, electrical, thermal, lightweight, formable and corrosion-resistant properties of aluminium have made it one of the most important and versatile metals in the world. We need a lot of it now, and we are going to need a lot more of it in the future.

So, How Much Do We Mine?

More than ever, and at an increasing pace…

Across the world, UN data shows that not only do we extract more almost every year, but the rate of extraction of material resources is also increasing. 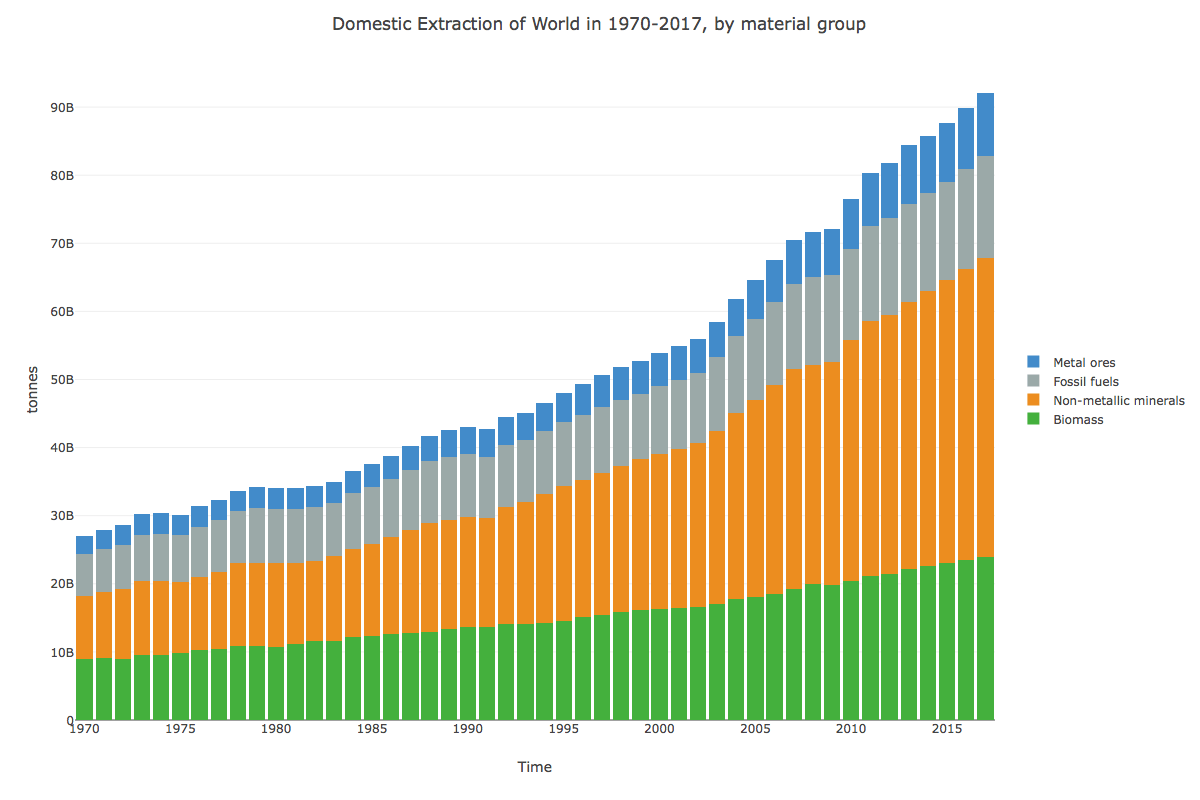 Figure 1. World total extraction of physical materials used by the world economy, calculated using weight in metric tons. Chart is by MaterialFlows.net. Amounts shown are based on the Global Material Flows Database of the UN International Resource Panel. Non-metallic minerals include many types of materials including sand, gravel and stone, as well as minerals such as salt, gypsum and lithium.

More than 160 million metric tons of bauxite are mined each year. The production of aluminium has doubled over the past 25 years and is expected to grow a further 50 percent by 2050.

That sounds alarming in environmental terms, but aluminium is not just simply ‘mined’. It’s a three-stage process that requires much more than the mining of bauxite — but also the extraction of alumina from the bauxite via electrolysis, and the smelting of that alumina into aluminium (with high heat furnaces) to be ready for manufacturing. All of this uses an incredible amount of power.

How Much Power Does Aluminium Production Use?

How Is That Power Generated? All of this is on top of mining the bauxite.

We Need More Aluminium, But We Need To Clean It Up. How?

The best way to clean up the devastating effects of aluminium is to reduce coal-powered production.

Where Do We Start?

Mining shouldn’t even be considered until recycling is at full capacity. And it’s not. It’s available, with large amounts of scrap dumped in developing nations irresponsibly by the West for example.

Where Are The Gaps?

We know that only 13% of all recyclable goods are salvaged from landfills in places like Nigeria.

We also know relatively no metal recycling is happening on the continent compared to the rest of the world:

Despite a population of over 1.2 billion, representing nearly a fifth of the people of the world, recycling is heavily under-represented with less than 3% of global scrap metal recycling happening on the continent.

1. There will be a price on carbon through:

2. Aluminium will be classified by carbon content on the London Metals Exchange (LME)

The LME outlined a plan in August 2020 to phase in carbon declarations. This is big, and has huge ramifications. High carbon aluminium, like the stuff produced with energy made from coal, represents over 70% of the current market. Low/zero carbon aluminium includes what we produce at Romco: recycled aluminium.

3. The green value of aluminium will be certified by third parties

4. Low / zero carbon aluminium will be at the front of the queue

5. Low carbon aluminium classification will create a lucrative market of its own

Some infrastructure projects limit aluminium tendering because of the heavy environmental cost. New low/zero carbon classifications will allow the sourcing of low carbon aluminium for large governmental and private projects

Where Does Romco Stand? 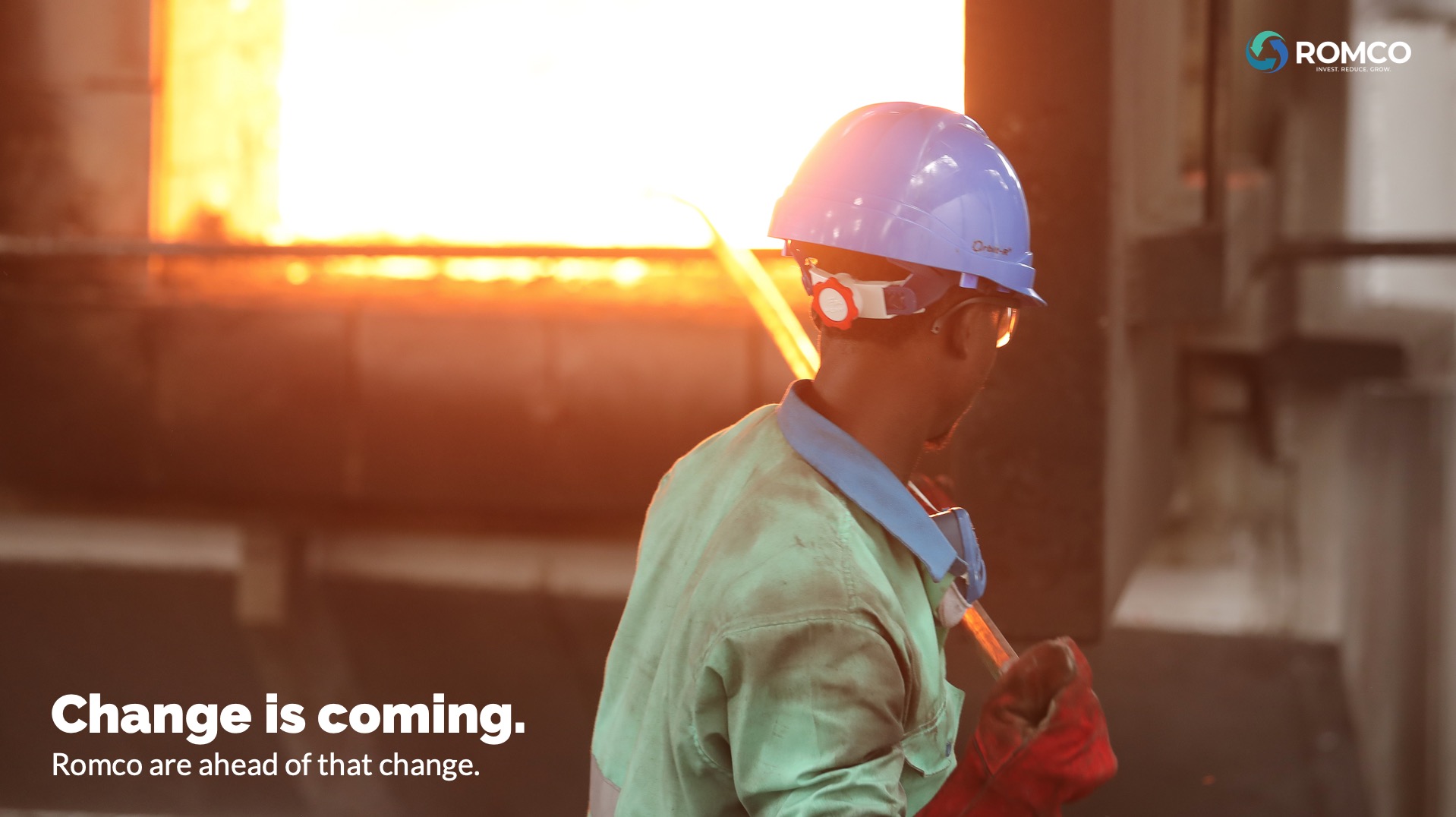 Romco are building a systematic, scalable recycling model, thriving in emerging markets, committed to reducing the environmental impact of raw materials mining — one of the most important things we can do in the 21st century.

That’s why we are growing ambitiously, right now — increasing our production capacity ten-fold over the past 18 months. There’s much more to do, but not too soon.

There is currently a focus on the industrialisation of Africa; a great race to mine Africa into an economic power.

An article on The Sino–European race for Africa׳s minerals: When two quarrel a third rejoices states:

“The dawn of the 21st century has brought about a new scramble for mineral resources on African soil. China׳s rising wealth levels and the country׳s growing demand for mineral commodities combined with Europe׳s eagerness to maintain its traditional sphere of influence and secure the continent׳s need for resource imports from Africa have added up to an international race for Africa׳s minerals.”

With this rise, Africa has the opportunity to meet that challenge by becoming a powerhouse in sustainability. A cleantech revolution on the continent is already underway, with renewable energy, sustainable infrastructure projects, and recycling at its heart. We are proud to be a part of that. Africa’s population is expected to grow 800 million by 2040 (according to the IEA), a rise equivalent to the populations of the US and Europe combined, totalling more than 2 billion people.

Investment in renewables needs to meet this extraordinary growth or the world will never reach its climate ambitions.

We’ve planned a total of 7 recycling facilities over the next 5 years.

Across all 7 plants, we envisage recycling over 100,000 mt of aluminium (and other non-ferrous metals) a year, growing Romco into one of the largest recyclers in the region, and a major world supplier of low carbon aluminium. For Romco there’s only one way to measure that… environmentally:

We Have A Problem, But We Have Solutions

Without ambitious investment in sustainable businesses, Africa’s economic growth will be marked by loss of biodiversity, soil erosion, fauna displacement, deforestation, contamination of water and soil… All the negative effects of mining without any of the mitigations.

That’s where Romco and like-minded organisations are focused — mitigation — on the reduction of air pollutants, carbon emissions, toxins, and consumption of valuable finite resources. The amelioration of an irresponsible 20th-century resource management philosophy by creating a truly circular and sustainable economy.

It’s a big problem, but we’re working on it.

We believe that we have absolutely everything we need to create a cleaner, greener, more livable world — if we all work together. Sign up below for more information on what we’re up to, and the broader impacts on irresponsible resource management across the globe.